The case of Evangeline Silva

Evangeline Silva is a 43 years old professional human rights activist. She is a farmer, who became a political activist during her school days. She is currently the elected national president of the farmworker organization “Pesante” and worked before for the local government as Barangay councilor, assigned to environment and land use from 2007 to 2013.

In September 3, 2013, her late husband and she submitted a petition to the Department of Agrarian Reform for cancellation of certificates of land ownership since they were not considered in the distribution process. After that submission harassments against them started, which most likely led to the death of her late husband, Agapito P. Silva (Aga), in February 3rd, 2015. He was killed by the police while he was supposedly holding his family hostage and under the influence of drugs. The death is questionable since the reason for the police action was based on the statement of the Brgy. Chairman Elpidio Velasco, who was also involved in the questionable land distribution process, as well as, there were not any drugs found in Aga’s body afterwards and he was killed long after he left the house and by that his family. The Commission on Human Rights currently prepares a report on this case to start an official investigation.

Evangeline, furthermore, exposed in June 2015 the same Brgy. Chairman of being corrupt and charging too much money for business licenses and other public services and keeping the extra money in his own pocket. He is currently on trial for that graft but still can use the funds of the Barangay to pay for his bail and his lawyer.

The same Brgy. Chairman filed in October 2015 a case against Evangeline for cutting a coconut tree after her license was expired and he also wrote a recommendation letter to start an investigation against Evangeline even though the accusation stated that her late husband was the perpetrator. In both cases, the prosecutor already declared to drop the cases due to lack of public interested and formal errors in the accusation, but it did not happened so far.

She also has another accusation against her in her function as Pesante leader. She was in February 2015 accused by a police officer in Coron and some former Pesante member to be the head behind a money scam against Pesante members in Coron. There might be reason for doubt about this accusation since the former members which testified against her, were the one who collected the money and Evangeline pushed forward to expel them from Pesante. The police officer has, furthermore, known connections to some of the landowners which will lose land if Pesante will be successful with its application for Comprehensive Agrarian Reform Program coverage. Her case reveals the nature of fabricated and trumped-up charges as a political instrument to silence human rights defenders. 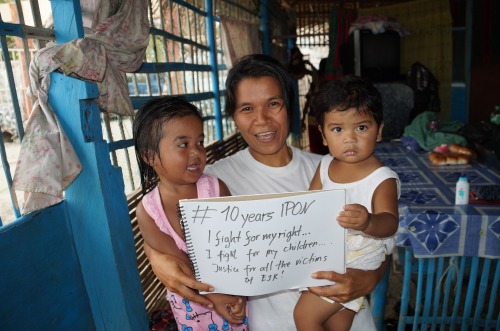